How many designers does it take to create a card game?

In November of 2021, Osama Dorias, Liz England and Sam Boucher organised a game jam (slash social experiment, slash communal design performance) titled “How many designers does it take to create a card game?”

I was invited, along with 99 other designers, to create a single card which would, along with the 99 other cards, form a deck to be used in a very chaotic game. Basically the only things I knew when I started designing the card were that:

You can read more about the project and see all the submissions here. Below, I'll talk a bit about my own card, the Pensive Lady. 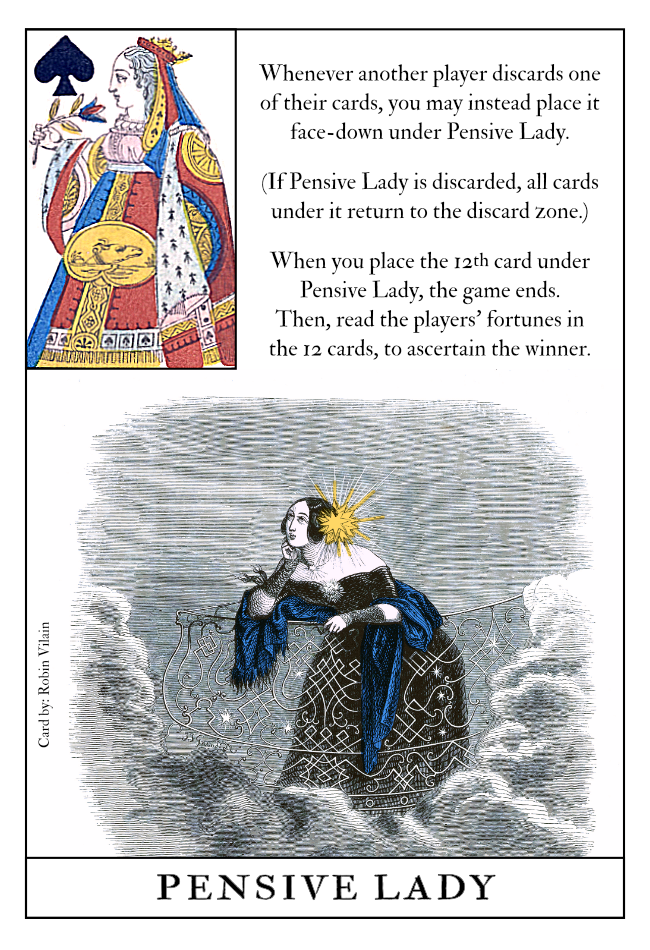 Card rules: Whenever another player discards one of their cards, you may instead place it face-down under Pensive Lady. (If Pensive Lady is discarded, all cards under it return to the discard zone.) When you place the 12th card under Pensive Lady, the game ends. Then, read the players’ fortunes in the 12 cards, to ascertain the winner.

When I started thinking about the project and what I would do for my card, I knew that I wanted to integrate elements of other card games, but not the kind that game designers often like to play and discuss (ie. MtG and the like). Instead, I was thinking of classic games like Hearts – which has always been a personal favourite of mine – as well as tarot and other forms of divination.

I started with the rules. The main goal was to evoke the Black Lady variant of Hearts, in which a player can attempt to “shoot the moon”: take all the spades, which you normally want to avoid (including the “Black Lady” herself, the Queen of Spades.) If they do so, they take 0 penalty points, while giving 26 (the maximum penalty) to all the other players. This creates a dynamic where a player has to hide that they're attempting to shoot the moon, lest an opponent prevents them from doing so; there's a slow crawl towards victory, with an increasing risk of failing and taking a huge penalty. When you do manage to shoot the moon though, the reward is all the more satisfying.

The Pensive Lady mechanically mimics the act of trick-taking (just like when winning a trick, you take cards from your opponents and place them face-down in front of you), and the gradual progress towards a big reward which other players have to counter before it's too late. Additionally, the rules ask for 12 cards, creating a stack of 13 cards when counting the Pensive Lady herself – the Queen of Spades is worth 13 penalty points in a game of Black Lady.

The last aspect I considered when designing the card was its ‘playability’ – I assumed that most cards in the game would feature complex rules (us game designers can't help ourselves), and wanted to limit the amount of in-game reading and manipulation to a minimum. This is why there are no rules that penalise you if you fail to collect 12 cards; it made the card too convoluted. Credit goes to Tom and Lucie off whom I bounced ideas on this topic, and I think the final text is pretty good in this regard – the need for conciseness even led to a creative spin on the win condition, which I'll go back to.

Thematically, the card pays homage to the French tradition of divination, as seen here. I knew I wanted to incorporate divination in the card, while also remaining true to my own culture – not because I am particularly fond of my French heritage, because it would feel wrong to use an aesthetic derived from a one that isn't mine without substantial research and sensitivity. French cards happen to have a long history that isn't often explored in modern cartomancy – the origins of tarot as an occult instrument are French... and this was a perfect opportunity. So I chose Le Petit Cartomancien deck as a basis and bought a copy (see picture); its Queen of Spades has a widow as the associated illustration, which echoed nicely the Black Lady game, and therefore was a perfect starting point.

I chose to replace the central illustration with one from J. J. Grandville, a renowned French illustrator and caricaturist from the early 19th century whose style is emblematic of that era. Many French cards used for divination, including the ones from Le Petit Cartomacien, use a style reminiscent of his. The actual illustration is from Les Amours d'un Pantin et d'une Étoile, a chapter from Grandville's Un Autre Monde.

The title brings everything together: it can be interpreted as a description of the widow from Le Petit Cartomancien, or as a nod to Pallas Athena (the Greek goddess of wisdom and the Queen of Spades herself in the "portrait officiel" style of playing cards, as used in the top-left corner frame). Of course, it's also simply a reference to the actual scene depicted on the card: a woman dreaming of becoming a queen – in this way, I wanted to play with the structure of the card to suggest a small narrative.

It was important to provide a win condition to mechanically match the concept of shooting the moon, but I really wanted to tie it to the divination element. I think the last line of the card rules does combine these two aspects – the player has essentially ‘won,’ but they get the opportunity to add a little occult flavour to their victory.

I iterated a bit over the phrasing to find the final version of the rule. Starting it with “The game ends; then...” serves as a way to both alleviate the ‘mechanical load’ (ie. the player knows that everything that follows is not part of the ‘game’), and to add a little gravitas to the proceedings.

It's also a subversion of conventional victory conditions: the player is given agency to interpret what a “fortune reading” might mean in the context of the game and how it might be performed. And in doing so, they can decide who the winner(s) is or are, or if there even is one. In a sense, just like I was invited to design this card, it is now their turn to invent a small playful ritual... after all, isn't divination a kind of game in itself? In the end, via this card, I hope we ask ourselves if designer, player and fortune teller aren't maybe one and the same.